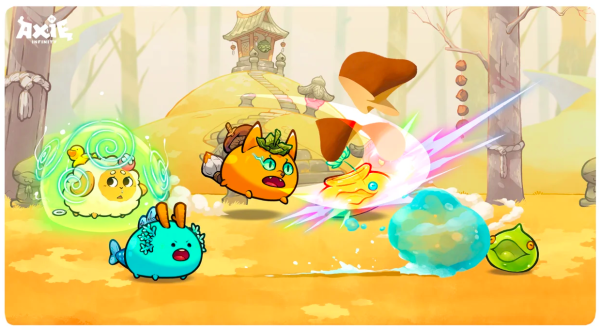 In a move designed to entice AXS holders, AXIE Infinity has offered native AXS tokens for trading on the Nexo exchange.

With the Nexo listing, investors will be able to purchase and sell AXS, as well as benefit from a new crypto interest suite model that will give investors 36% yields on AXS holdings, with daily payouts. In addition, plans are afoot to offer 0% APR loans to AXS holders.

The announcement of Axie Infinity’s arrival on the exchange is part of Nexo’s strategy to stimulate in-game markets by providing sophisticated financial tools in its ecosystem.

*The amount of cashback you receive depends on your Loyalty tier. The higher your tier, the more cashback you get. Ex. Platinum users get the full 0.5% cashback.

Nexo identifies the metaverse as an area of growth, and views decentralized virtual worlds as a vital sector for innovation in gameplay mechanics and markets.

A number of trading pairs have been created for the AXS listing, which will enable users to directly trade AXS against BTC, ETH, USDT, EUR, and GBP – alongside facilities for direct card payment purchases of AXS tokens.

This is augmented by the opportunity to use AXS-backed crypto credit lines, which collateralise holdings for instant stablecoin loans for amounts up to $2m.

Buying AXS on Nexo is safe and simple. There are no complex procedures, the UI is intuitive and user-friendly, with purchases available both using direct card payments and crypto pairs.

Grow your AXS holdings on the Nexo platform with up to 36% interest p.a, paid out daily. Our Earn Crypto Interest suite enables you to top up or buy AXS and start growing your passive income right away.

Nexo is launching their AXS integration with a promo: until March 31, 2022, you get up to 36% annual interest, paid out daily when you buy AXS on Nexo. Your Loyalty tier determines your interest along with whether you’re earning with Fixed Terms and Earn in NEXO. To put that into numbers, the interest rates on AXS on Nexo are:

Nexo’s Instant Crypto Credit Lines™ are now available for Axie Infinity’s AXS. You can now borrow cash or stablecoins using your AXS as collateral at rates starting from 0% APR. You can find a breakdown of Nexo’s borrowing rates here, but as a general rule, the more NEXO Tokens you have in your account, the lower your credit line interest will be.

The minimum borrowing amount is $50 and the maximum is $2 million per single withdrawal. Requests are typically approved within seconds and no credit checks are needed. Credit repayments are also flexible: you can pay off your loan partially or fully whenever you like.

Axie Infinity is an NFT game where players battle, collect, and trade digital pets called Axies. Axie is the first game designed to be owned and governed by the community that plays it. In-game assets are completely owned by the players, and players can generate real-world rewards for their in-game activities. Axie Infinity has achieved over 3.8 Bn USD in total transactions with over 2.9M daily active players of the platform putting their time and effort into generating real value. In 2018, Axie was founded with the aim of introducing blockchain to the world through a familiar,and  nostalgic experience. For more information on Axie Infinity, please visit https://axieinfinity.com/.

Despite Acquisition Fallout, Nexo Pushes to “save” Bankrupt Crypto…

Super-Admin
Jan 10, 2023 1 min read
Have A Story? Get Featured On Nexofly Plus 100+ More Exclusive Crypto News Sites Tell Me More !